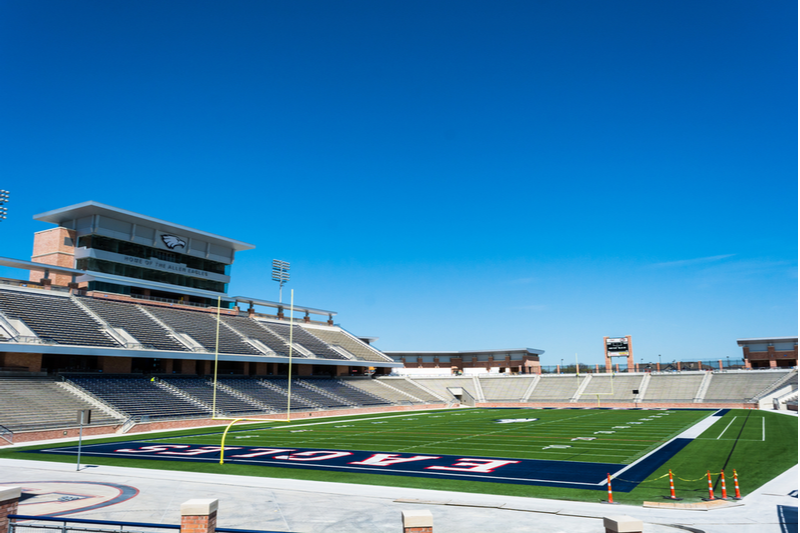 The Allen High School stadium cost $60 million and seats 18,000 or so. (Image credit/Shutterstock)

High school football in Texas is nothing like the variety found in most of the rest of the country. For one thing, there is the passion. For another, though, there are the stadiums. There are more than 1,300 high school football stadiums in the state with a combined seating capacity of more than 4.1 million. So we undertook a mission to identify the five best places to watch the action.

5 – It’s Texas, so it’s bigger. Toyota Stadium in in Frisco, which seats more than 20,000 spectators, is the largest venue for high school football in the state. However, it was built for the “other” kind of football – most of us know it as soccer. Yep, the stadium is home for FC Dallas Major League Soccer team.

3 – All it was cracked up to be. McKinney High School in McKinney, TX, built a $69.9 million stadium in 2018. Alas, it also was victim to cracks. But that didn’t stop the stadium, which seats 12,000 or so and features a 50-by-30-foot high-definition video board, from opening last year.

2 – From rice to riches. Katy High School in Katy, TX, opened in 1898 for rice farmers in the region. Now it’s one of eight schools that use Legacy Stadium, a $70 million, 12,000-seat stadium that opened in 2017. Perhaps it’s fitting that the school plays in a palace – it has ruled Texas high school football, winning four state championships since 2006. Alumni include Cincinnati Bengals quarterback Andy Dalton and actress Renee Zellweger. Her football chops? She co-starred in Jerry Maguire.

And the No. 1 coolest place to watch high school football … Really? You have to ask? Ratliff Stadium in Odessa, TX, home to the Permian High School Panthers, the subject of the nonfiction book Friday Night Lights and the fictional movie and television series that were based on it, though the TV show was set in the fictional town of Dillon, TX. Can Billy Bob Thornton, Connie Britton, Kyle Chandler, and Michael B. Jordan be wrong?

Tell us what you think of our choices in any of the following ways: on Twitter (@chooseenergy) and Instagram (@choosetexascool), on our Facebook page (in a comment on any of our #TexasCool posts), or by email.