Solar Careers on the Upswing

Solar power was introduced back in 1839 by Alexandre Edmond Becquerel. He discovered the photovoltaic effect, which explains how electricity is generated from sunlight. Since then, scientists across the globe have researched and iterated on his idea to create the solar technology utilized today.

As the push towards renewable energy presses on, there is a growing need for more experts in the renewables field. Of course, there are general sustainability studies at various universities, including Appalachian State, UNC-Chapel Hill and the University of Pennsylvania. However, some higher learning institutions are educating and training students specifically for careers in solar energy.

One FEJA-enabled project brought in IBEW-affiliated electricians to teach one of the first community college-level solar classes at Olive-Harvey Community College. The students that took the course constructed their own solar panel project that had the potential to produce 2.3 kilowatts of power when connected to a power grid.

The positive results brought about by FEJA have called attention to the need for more professionals in solar energy. Many professionals, including CEO of ExpertSure, Ollie Smith, see a bright future in this career path.

“As the owner of an environmentally friendly business, I believe that we are all witnessing the rise of the renewable energy sector, especially the area of solar power generation and management.  In my opinion, those who have the foresight now to study this area will experience a variety of benefits in the future.  This sector offers a career path for those currently stuck in dying industries, it offers a variety of different positions, increased salary as you gain more experience and you get to contribute to improving the environment as you work.  A great potential career for those with the foresight to jump into it,” Smith said.

The Solar Foundation of the United States, which was founded in 1977 is a nonprofit and nonpartisan organization that aims to spread the advancement of solar power and technology around the world. The foundation believes  solar energy, in addition to creating thousands of jobs, also offers numerous economic advantages and builds a stronger power grid.

The Foundation provides a National Solar Jobs Census, which reports the size and scope of the American solar workforce. 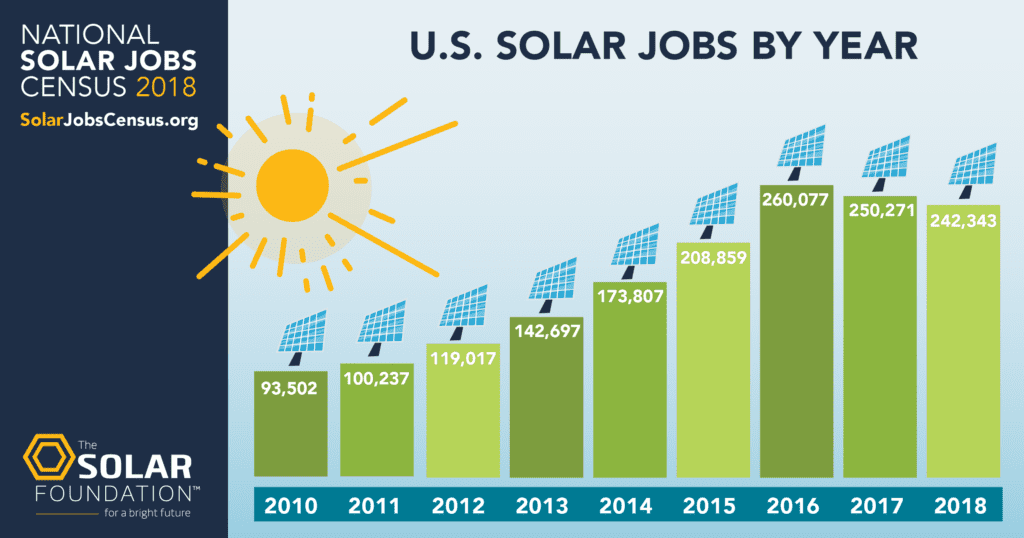 In 2018 there were 242,343 solar jobs in the U.S. (A solar worker is defined as someone who spends 50 percent or more of their time on solar-related projects.)

Although the numbers have dropped slightly since 2016, the overall increase since 2010 is impressive; around 150,000 solar jobs were created in the last decade, providing clean, renewable and affordable energy to people all across the country.

“Renewable energy is here to stay and we can all do a better job at promoting the industry to young, diverse talent. In an industry with such broad needs, there’s room and need for everyone,” Hernandez said.

Hernandez also emphasized the rise in the number of females in this industry, especially female leaders. Within EnLight.Energy, there are many women with important roles who expand the company, work hard and make sure the company runs smoothly.

As more and more companies aspire to reach 100 percent renewable energy, there will be additional opportunities in the solar industry.