The cost of solar panels

The average cost of home solar panels in 2021 ranges from $15,000 – $25,000 before tax credits. A typical residential solar system is 5-kilowatts (kWs) and most systems cost between $3 – $5 per watt. Of course, the total cost of a home solar system is determined by several factors, including installation costs, local tax credits, and the size of the solar system.

For many homeowners, the upfront cost to buy residential solar panels is too high. The good news is that solar panel costs have decreased substantially in the last decade. According to the SEIA, the price to buy solar panels has dropped by 70 percent in the past 10 years. The cost decrease has led to growing popularity in home solar systems. The EIA estimates residential solar generation has grown annually by about 32 percent in the last decade.

If you are interested in a residential solar system or curious about the cost of solar panels in 2021, Choose Energy is here with this guide to answer the most common questions.

California leads the country in solar energy generation, but many other states are quickly expanding their presence in the solar industry. As more consumers invest in home solar systems, the cost of solar panels have lowered across the country by as much as 70 percent.

The cost of solar panels varies by state and is influenced by the factors we discussed above. But the energy savings are impressive no matter the location. Following are the top states for solar generation and how much consumers can save by investing in solar panels.

Cost of Solar Panels by State

On average, a solar panel system costs 15 watts per square foot. However, measuring by square foot is not the most efficient way to estimate solar panel cost, so most solar installation companies will offer a quote measuring the cost per watt instead. That’s because the capacity of a solar panel – or how much electricity it can generate – is the main factor when it comes to how much a company charges.

There are several factors that influence the total cost of solar panels in 2021. Here is a breakdown of the most common solar features that can impact the total solar cost. 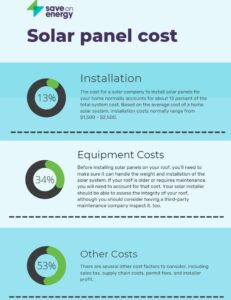 Factoring in tax credits can significantly reduce the total cost of a home solar system. But the savings can continue into long-term energy costs, too. The U.S. Solar Energy Technologies Office (SETO) launched its SunShot Initiative in 2011, aiming to bring solar costs down for consumers. So far, the initiative is on track to bring the residential solar rate down to 5 cents per kWh by 2030.

Despite the substantial cost savings that come with investing in home solar panels, many consumers worry about how to cover the upfront costs. It’s true that the cost of solar panels is one of the drawbacks to investing in solar energy. Thankfully, there are methods of bringing down the total cost of residential solar panels.

Currently, there is a federal tax credit in place that pays back 26 percent of the total cost of a home solar system. The Solar Investment Tax Credit (ITC) was created in 2005 to help lower the overall cost of solar panels and make them more affordable for consumers.

The federal tax credit is currently set at 26 percent, but it’s important to note that the percentage has gone down in recent years. It was initially set at 30 percent in 2019 and plans to reduce to 22 percent in 2023. As of now, the solar tax credit will expire in 2024 unless Congress renews it.

Another solar option with a lower upfront cost is a solar lease. With a residential solar lease, you pay a monthly fixed rate to a solar company. This company maintains ownership of the panels and system, but you are able to power your home using the electricity the panels generate.

Keep in mind that solar leases lead to lower-cost savings in the long run compared to purchasing solar panels. With a solar lease, you will also not be eligible for the federal tax credit or many other incentives and rebates.

A solar power purchase agreement (PPA) offers an additional alternative to paying for solar panels upfront. Solar PPAs work much like a solar lease, but the rate you pay each month to the solar company is determined by how much electricity your panels produce. The more energy they generate, the more you will pay every month.

Many states offer solar tax credits and rebates that can be paired with the solar ITC. Some of the top states for solar incentives include:

Are solar panels worth the cost?

So, are solar panels worth the upfront cost? The bottom line is yes. Investing in home solar panels will lead to substantial energy savings over time because you can power your home using electricity that you generate yourself.

Solar panels also allow for increased energy independence. This is important because you will not need to rely as heavily on the power grid and will be protected from energy price increases during times of high demand and power outages in your area.

Finally, residential solar systems generate clean, renewable electricity. Green energy sources such as solar power are much better for the environment because they do not emit greenhouse gases like carbon dioxide into the atmosphere.

Overall, the energy savings (and environmental benefits) of investing in solar panels make them well worth the upfront cost. And as the overall price of solar systems continues to decrease, home solar panels will become even more affordable for consumers in the coming years.