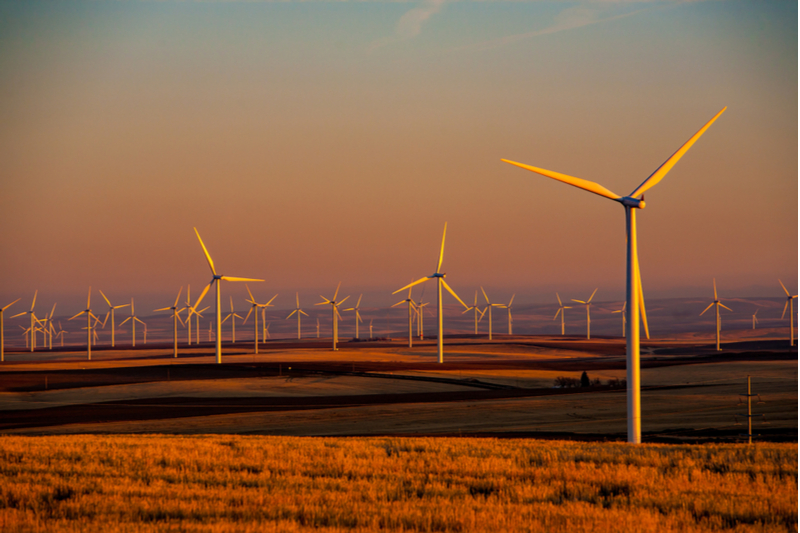 The Maverick Creek wind farm is the latest addition to the rapidly expanding wind power industry in Texas. The 119-turbine facility in Concho County in central Texas will be capable of powering 168,000 homes with its 480 megawatts of energy when it comes online in late 2020.

Concho County is considered an ideal location for wind farms due to its combination of flat land and steep slopes. The site for Maverick Creek, located about 2 miles northwest of Eden, is only a short distance from the state’s electricity grid. The nearest connection point is just 18 miles away.

Renewable Energy Systems (RES), the largest independent renewable energy company in the world, and Algonquin Power & Utilities Corporation are joint developers of the wind farm. “This project is a clear demonstration of our mutual commitment to a sustainable future and growing the economy through renewable development,” says Graham Reid, CEO of RES.

175 temporary construction jobs will be generated by the project, which will maintain five to ten permanent jobs after its completion.

“It’s a continuation of what we’ve been seeing,” adds Joshua Rhodes, a research associate at the University of Texas at Austin’s Energy Institute. “Which is a robust wind buildout in Texas.”

The project is part of a booming wind power industry in the Lone Star State. Texas produces by far the most wind energy in the country, accounting for one quarter of total U.S. wind energy production.

In the first half of this year, wind power generation surpassed coal output for the first time. The Electric Reliability Council of Texas reported wind accounted for 22 percent of the state’s energy generation from January to June, compared to 21 percent for coal. The rapidity of the shift is reflected by the fact that as late as 2003, wind accounted for just 0.8 percent while coal made up 40 percent.

However, not everyone is enthusiastic. In August, Texas experienced a huge spike in energy prices as energy usage shot up during the hot summer days. ERCOT was forced to call an energy emergency as its available reserves tumbled to little more than 2,000 megawatts.

Part of the problem was that the state’s 26 gigawatts of wind power capacity were generating low returns. The hot weather brought calm days, which meant a slowdown in wind power generation. Critics of the massive buildout of wind farms pointed out that Texas retired 4 gigawatts of coal power generation alone last year, which would have gone a long way in managing demand in August if the plants had still been online.

“The situation may get more dire as additional wind farms are built,” argues Mary Hutzler of the Institute for Energy Research, a free market think tank. “The close call in Texas in mid-August should be a lesson for ERCOT to rethink how it is valuing dispatchable, baseload power. The addition of more intermittent capacity to the market will likely make the reliability challenges Texas is facing only more difficult to manage.”

Another feature of the Maverick Creek development is the important role being played by corporate investment. General Mills, the food services giant, is largely responsible for funding the project with a 15-year virtual power purchase agreement. This agreement will pay for 200 megawatts of the 480 megawatts generated. Under the virtual PPA, the Minnesota-based corporation will receive green energy credits, which can be used to offset its own energy use.

John Church, chief supply chain officer at General Mills, says the investment is important for his company’s clean energy strategy. “The equivalent of our domestic facilities’ annual electricity needs will be covered by clean wind power, helping to reach our climate commitment of decreasing our carbon footprint by 28 percent by 2025,” Church says.

Other corporate investors are flocking to wind and solar projects in Texas and beyond. Earlier this year, Facebook announced a PPA for 200 megawatts of power to be generated by the Aviator East wind project in Cook County. The social media operator also partnered with Dominion Energy in April to help finance six solar power projects in Virginia capable of generating a combined 350 megawatts.