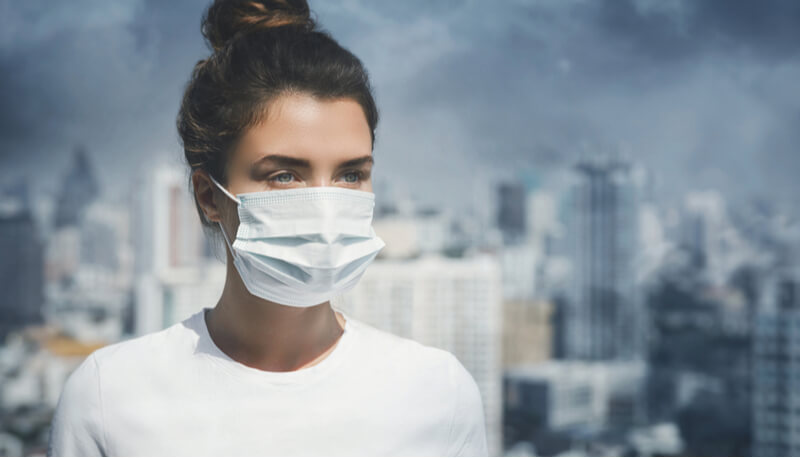 As the world struggles through the novel coronavirus pandemic, bad news is rising. Citizens spend evenings glued to their televisions, watching news tick by about death counts, statistic curves, and the stock market. But within the shadows, there’s something else happening for pollution levels.

“At night there are stars. During the day the air is so clean that, for once, you can’t taste it, free of the usual smoky metallic tang,” reported South Asia bureau chief Jeffrey Gettleman for the New York Times.

All across the globe pollution levels are dropping in an environmental experiment that no one asked for. But is it really a silver lining of an otherwise disastrous start to the new decade?

The COVID-19 pandemic has caused record unemployment claims, a worldwide lockdown, and a plummeting global economy. And while the air may have cleared for now, experts say it is unlikely to last.

Tracking pollution through a pandemic

New York has become the epicenter of the U.S.’s fight, now with over 140,000 reported cases of COVID-19. The state locked down on March 20, taking most transportation – the largest emitter of carbon monoxide – with it.

Meanwhile in China, where the virus began late last year, pollution began to slow as early as February after the start of a nearly 10-week lockdown. As a result, nitrogen dioxide, which contributes to asthma and forms ozone, was down 36 percent.

India has seen perhaps the most shocking change, as home to 14 of the 20 most polluted cities in the world. According to Gettleman, New Delhi’s Air Quality Index (AQI), which measures daily pollution, was at 38 last week, just seven days into the country’s lockdown. It is a stark contrast for a city that normally ranks at 150 AQI on a good day and 500 AQI on its worst.

But it didn’t take a full lockdown to see environmental progress. Even the city’s gradual slow down through the beginning of March caused nitrogen dioxide to drop 40 percent, reported journalist Rebecca Wright on CNN.

However, scientists are beginning to note another link between pollution and coronavirus – and a much deadlier one at that.

“The impact of living in such badly polluted conditions has left a hidden problem for residents: a potential vulnerability to the coronavirus pandemic — a severe respiratory disease,” wrote Wright.

The calm before the storm

Though many are calling the pollution drop a silver lining, it remains to be seen if that will hold true beyond a brief respite.

“As a coronavirus-related economic fallout, carbon emissions could decline in 2020. But, without a concerted effort, they’re unlikely to stay down,” explained reporter Justin Worland in Time.

While there isn’t much historical comparison for how health crises impact pollution levels in the long-term, there is evidence on the economic side of the fence.

The world saw a drop of about two percent in carbon emissions during the Great Recession in 2008. But once the economy rebounded, Chrobak explains, global emissions started to grow again.

Beyond the economic precedent, the coronavirus pandemic is clearly not a shining example of how to reduce environmental impact, for obvious reasons.

“Any sustainable reduction in emissions and pollution will need to happen in a way that doesn’t totally splinter society,” Worland continued.

In the ultimate irony, it appears that countries coming out of lockdown may even begin polluting more rapidly than they were before the crisis as producers try to make up for the time and business lost.

Where do we go from here?

In China, where restrictions on the city of Wuhan were lifted on April 8, pollution levels are reverting to the norm almost as quickly as they dropped months earlier.

Meanwhile, governments are showing themselves more willing to relax regulations to help get economies and businesses back on track.

“Last week, the Environmental Protection Agency confirmed that the Trump administration had relaxed enforcement of regulations to help polluting industries deal with the pandemic,” Luke Denne wrote for NBC News.

This includes reducing restrictions on single-use plastics and plastic bags – long a pinnacle of the environmental fight. Additionally, the United Nations’ COP 26 climate conference, expected to be the most important discussion on climate change since the Paris accord in 2016, has been pushed back to next year.

But it doesn’t have to be this way. Chrobak reports that 18 countries have grown their economies while simultaneously reducing emissions since 2010.

“If policymakers make a concentrated and sustained effort to decarbonize our economy, today’s clear skies give us a preview of what may come—even if it takes decades to get there,” Wordland concluded.

In a year already marked by catastrophic wildfires, flooding, and now a massive health crisis, one can only hope the alarm bells are starting to ring. For now, this unplanned experiment is showing that the earth can in fact come back from the brink, and quickly. Only time will tell if the health of the earth and the health of humanity are mutually exclusive.