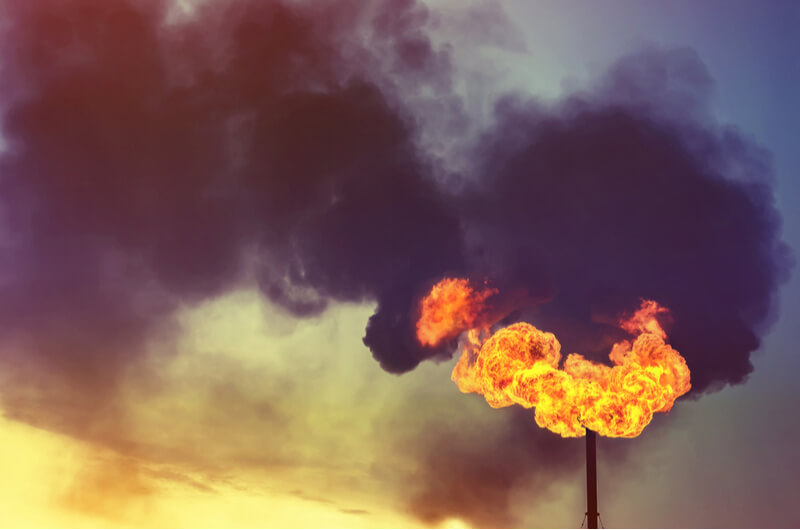 The Texas Railroad Commission’s (RRC) release of a report analyzing natural gas flaring trends has intensified the debate on what should be done to curb the practice.

The document, the first of its kind on flaring trends, argues that Texas-based oil producers are much more efficient when it comes to flaring natural gas than their competitors in other countries. However, critics argue that the regulator is using industry-friendly measurements to justify its reluctance to adopt more stringent restrictions.

Flaring occurs when oil producers burn off natural gas produced as a byproduct of oil drilling. Companies see this as a more economically viable option to transporting the gas to market, either due to an absence of pipeline capacity or a lack of demand for the product. Estimates suggest that enough gas is flared in Texas to power the state’s energy needs.

The figures presented in the Texas Railroad Commission’s report suggest that oil producers in the Lone Star State are already performing well when it comes to restricting flaring. Using a measurement that compares the number of barrels of oil produced with the amount of natural gas flared, known as “flaring intensity,” the report concluded that producers in Texas are more efficient than those operating in other parts of the United States.

It also argues that the U.S. is far ahead of other energy-producing nations, like Iran and Iraq, on the issue of limiting natural gas flaring. The report found that Texas flares 0.09 million cubic feet (Mcf) of natural gas for every barrel of oil produced. This compares favorably to a global average of 0.14 Mcf, and 0.37 Mcf in Iran and Iraq.

Based on these findings, RRC commissioner Ryan Sitton argues that measures to curb flaring should focus on countries and regions with a higher intensity of gas flaring than Texas.

Sitton elaborated on this point in the report’s executive summary, writing, “In fact, by looking at various methods to reduce flaring in Texas, many of them presented risks of actually increasing global flaring rates, as other nations and regions flare much more gas when they produce oil.”

“Conversely, it is hard to ignore the fact that as other nations are flaring at levels four times higher than Texas that they, therefore, present much more efficient paths to global flaring reductions,” he said.

Sitton rejected calls to assess flaring based on the total quantity of gas flared. Given that Texas is by far the leading energy-producing state in the United States, this approach would result in a much more critical view on the amount of natural gas burned off by Texas-based oil and gas producers.

Critics of the RRC’s approach maintain that the focus should be on the absolute amount of natural gas being flared. By this measure, Texas performs very poorly compared to other regions. The shale oil and gas boom over the past decade has resulted in a 40-fold increase in flaring permits, driven by a five-fold growth in oil output.

Flaring releases CO2 into the atmosphere, accelerating the process of climate change. Venting, the practice of emitting unburned methane into the air, is even more harmful, since methane is a much more powerful greenhouse gas than carbon dioxide.

No restrictions exist on flaring for oil producers during the first 10 days after drilling a well. After this period, they must seek approval from the RRC in order to flare. In 2019, the RRC granted 6,972 permits to flare or vent natural gas. Since 2013, the RRC has not denied a single flaring permit.

Even major players in the oil and gas sector are publicly advocating for stricter controls to cut the amount of gas flared in absolute terms.

“A lot of that has to do with infrastructure, but I believe a bigger part is to do with robust, fit-for-purpose policies and regulatory requirements to incentivize reduction in flaring,” said Amir Gerges, vice president of Shell’s operations in the Permian Basin.

Bobby Tudor, founder of the Houston-based Tudor Pickering Holt Co., an investment bank that advises energy producers, agrees that regulators can do more.

“It’s not an easy, black-and-white, ‘Well-why-don’t-you-just-tell-them-to-stop?’ kind of problem,” he explained. “But I think in general, a much firmer stand from the Railroad Commission and leadership from the most active companies can make a difference.”