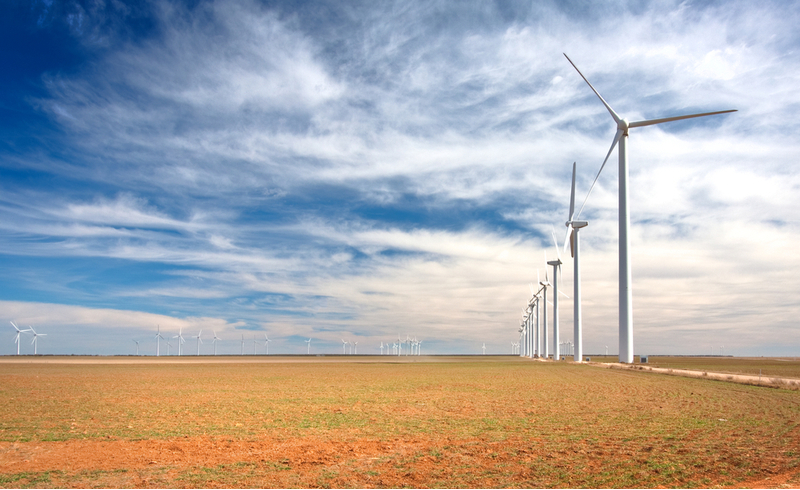 A large wind farm in Coke County, Texas, will sell 200 megawatts of energy output to Facebook when it comes online next year. The tech giant is one of many firms interested in purchasing power from the Aviator Wind project, with developer Apex hoping to find corporate buyers for the 512 megawatts the facility will output.

Upon completion, Aviator will reportedly be the largest single-site wind farm in the United States. Duke Energy operates the largest wind farm in Texas, which is capable of producing over 900 megawatts of power. However, that facility was built in several different stages over four years.

Facebook’s power purchase from the Aviator Wind project will add to the 2.2 gigawatts of renewable energy the company purchased by the end of 2018.

“As part of our goal to support 100% of our operations with renewable energy, we want to help drive the energy transition and increase access to wind and solar power around the world,” says Urvi Parekh, renewable energy manager at Facebook. “This project will be an important part of successfully reaching our targets.”

Google is another leader in the corporate race to invest in renewables. In April 2018, Google confirmed it purchased more than enough renewable energy to power its global operations, meeting a target set in December 2016. According to the Rocky Mountain Institute, as of April 2018, Google investments created an additional 2.4 gigawatts of renewable energy in the United States.

Climate change goals are playing an important role in the dramatic expansion of the corporate renewables market. “In the absence of a federal mandate to decarbonize the US power grid, corporates are stepping up their efforts to address climate change,” explains Dan Shreve, head of wind power research at Wood Mackenzie.

In addition, corporations are motivated by a decrease in cost. Technological developments are reducing prices for renewables, particularly solar. Researchers found that while wind power remains the primary renewables investment by corporations like Amazon, Google and Facebook, solar is catching up quickly.

Experts suggest solar could soon challenge wind for the top spot in corporate investment, including in wind power strongholds such as Texas. However, these experts add that changes to federal policy, like the abolition of tax credits currently offered for solar power developments, could hinder the increased investments.

Shreve and his colleagues also found that the prospect for renewables to grow in the corporate sector is substantial. Although corporate and industrial businesses contracted to buy 6 gigawatts of renewable power in 2018, renewables account for only 5 percent of the total energy market of Fortune 1000 companies.

Translated into investment dollars, the 85 gigawatts of renewable energy required by corporations over the next decade mean billions are up for grabs for energy-producing states. Texas and other wind-producing states in the U.S. will compete with solar projects across the country.

For AWEA chief executive Tom Kiernan, this means states will need to take the initiative to secure corporate investment. “Wind and solar are stronger in different parts of the country, so states must ensure they have competitive policies and adequate transmission infrastructure to attract investment in the renewable projects and business activities that they will power,” Kiernan explains.

Transmission infrastructure will become increasingly important as companies hope to invest in projects they can use directly. Thus far, corporations such as Google and Facebook have effectively invested in renewables to offset the energy used by their global operations.

As Urs Hölzle, Google’s senior vice president of technical infrastructure, put it last year, “It’s not yet possible to ‘power’ a company of our scale by 100 percent renewable energy.” However, he added, “We do want to get to a point where renewables and other carbon-free energy sources actually power our operations every hour of every day. It will take a combination of technology, policy and new deal structures to get there, but we’re excited for the challenge.”