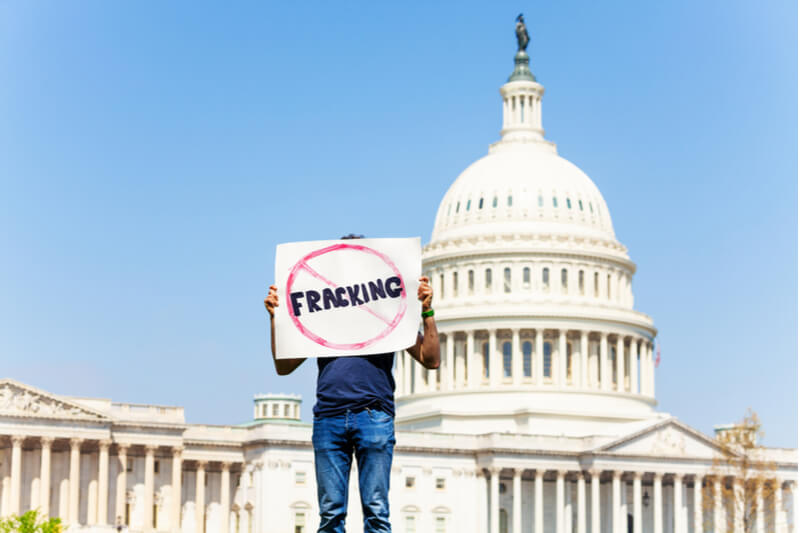 Former vice president Joe Biden has officially won the Democratic presidential nomination for 2020, ahead of a November contest against Republican incumbent, President Donald Trump. The nomination brings with it questions of the climate platforms Americans will be seeing come the fall, as Biden has historically been less supportive of a fracking ban than his more left-leaning competitors.

For months in the Democratic primaries, fracking led debates as a hot-button issue that had Bernie Sanders, Elizabeth Warren, Biden and other candidates scrambling to sway public opinion. While Sanders promoted a full-on fracking ban, Biden toed a more conservative line.

Now, with a pandemic-related oil crash in full swing and ongoing debates about energy systems of the future, it is less clear what the November running platforms will look like.

An ideological split in the primaries

The 2020 Democratic primary race made history with one of the biggest and most diverse fields the party has ever seen. It also became a battlefield for climate change, where activists refused to stand for candidates’ wishy-washy platforms.

“Increasingly, activists are working to make an end to fracking into the latest litmus test for 2020 Democrats: Support it, or announce yourself as unserious about the climate threat,” The Washington Post analyzed at the time.

As the media and American citizens began to sort out candidates’ views on a plethora of issues, fracking divided the pack along two main viewpoints: ban fracking entirely, or simply increase regulations.

Sanders and Warren alongside Kamala Harris, Jay Inslee, and others pushed for a total fracking ban. Biden along with Andrew Yang, Amy Klobuchar, Pete Buttigieg and eleven others preferred further limits and a better regulatory system.

A booming industry in the Lone Star State

Home to the Permian Basin, an 86,000 square mile expanse of oil-rich shale across West Texas and New Mexico, the Lone Star State has long been the posterchild for the country’s fracking boom. New technology and a new interest in the area allowed the Permian industry to explode from 2011 onward, growing from under 1,000 barrels per day to upwards of 4,500 barrels per day at the beginning of 2020.

So, when Sanders brought his anti-fracking proposals to the national stage and remained a leading Democratic candidate through a majority of the primary race, Texans were skeptical.

In January, the U.S. Chamber of Commerce’s Global Energy Institute released a study on the impact a Sanders-style fracking ban would have on Texas. It concluded that such measures would lead to the loss of 3.2 million jobs over the next five years as well as a $1.5 trillion loss in the state’s GDP.

“Our study shows that banning fracking would have a catastrophic effect on our economy, inducing the equivalent of a major recession and raising the cost of living for everyone across the country,” said Global Energy Institute president Marty Durbin.

This was, of course, before COVID-19, stock market declines, and a deteriorating OPEC relationship between Russia and Saudi Arabia caused an unprecedented oil crash, which has drastically changed the narrative around fossil fuel growth.

“The change in narrative — from a focus on the industry’s resilience to its fragility — threatens to reframe how the financial community thinks about the future of the oil and gas industry, and even its very investability in a world beset by geopolitical infighting and looming demand destruction from the low-carbon transition,” wrote Ceres oil and gas director Andrew Logan in a CNBC op-ed.

A key metric: the Permian Basin’s loss of its number one title to the Marcellus Shale in Pennsylvania and West Virginia, which is also experiencing cutbacks – albeit less than the Permian.

Heading into November, it is unclear how historical stances on fracking will combine with developing evidence on fossil fuel fragility.

Trump has throughout his presidency been friendly to fossil fuel interests, including building a plan to open federal land in California to oil and gas drilling. Biden, however, has been more difficult to pin down.

“Pushing for a total ban could hurt his general election chances in the swing states where fracking has propped up the economy, such as Ohio and Pennsylvania,” explained reporter Salvador Rizzo in the Washington Post. “Anything less than a total ban could detract from Biden’s appeal among liberals and climate-change activists in the Democratic base.”

What is true so far is Biden’s $1.7 trillion plan to achieve net-zero emissions by 2050. This fits with Biden’s previous claims that he would not allow new fracking but would also not ban it outright, instead preferring a gradual transition – a platform that would allow him to access votes on both sides of the debate.

“The gas industry, unions and their supporters had warned Democrats against nominating either Sen. Bernie Sanders of Vermont or Sen. Elizabeth Warren of Massachusetts, who want to ban fracking nationwide,” reported E&E News in May. “Strategists also feared doing so would put Pennsylvania out of reach for the party, risking a major swing state and its valuable electoral votes.”

Public opinion shifts stemming from the pandemic and oil crash will determine how the two nominees’ positions change before November. With Sanders out of the running and Biden toeing a fine line, though, it appears Texas is safe from an all-out fracking ban – for now.