Since 2002, over a dozen states have enacted some level of electric choice. There is debate among Public Utilities Commissions, energy customers and industry experts nationwide about whether deregulated energy markets truly offer customers better options when it comes to where and what supplies their energy. To those on the fence, there is no state that better exemplifies the benefits of a competitive energy market than Texas.

Why is Texas’ energy system special?

The Texas deregulated electricity market is a unique system for a few reasons. One, the state’s deregulated market is the largest in the country, with roughly 85% of the population taking advantage of electric choice; two, the power grid is contained within the state, exclusively providing electricity to Texas electricity customers; and three, the deregulated system has produced an unforeseen benefit: reduced carbon emissions and pollution levels.

Fair pricing for all

The Electric Reliability Council of Texas, commonly referred to as ERCOT, oversees Texas’ deregulated system and operates its self-contained power grid. By opening the market to globally-trusted retail energy providers (REPs), ERCOT constantly drives competitive pricing among the REPs without sacrificing the quality of service to its customers.

Prior to restructuring the energy market, electricity ratepayers in Dallas paid 9.7 cents per KWh. Today, Dallas energy customers can find rates as low as 8.3 cents per KWh from the highest-ranking retail providers. The open market continues to appeal to Texas holdout cities, with more municipalities joining the open market every year.

The city of Lubbock, for example, asked to bring electric choice to its 100,000 customers and give ratepayers “the same opportunities to have choices for retail electric services that are enjoyed by the majority of Texans”, as stated by Lubbock Mayor Dan Pope. Denton, another Texas municipality, recently passed a vote to become the second city in the state to be run with 100% renewable power, a goal only made achievable through affordable pricing contracts with solar and wind developers.

The future of Texas (and the nation) is renewable

Texas’ deregulated energy market not only pushes REPs to compete for lower rates, it also encourages them to innovate and develop new, affordable methods of sourcing energy. Former Governor of Texas, Rick Perry, was a champion of wind energy in the state due primarily to its economic benefits rather than its environmental ones.

Texas currently leads the nation in wind capacity, with nearly 12,500 turbines producing enough electricity to power 5.3 million homes. The Lone Star State is also utilizing its abundant sunshine as a power source; to date, Texas has invested upwards of $2.8 million in solar projects statewide. And as renewable energy sources have grown, fossil fuel usage has declined. Coal and natural gas consumption, which accounted for about 90% of Texas’ electricity in 2003, has fallen to 71% in 2017. 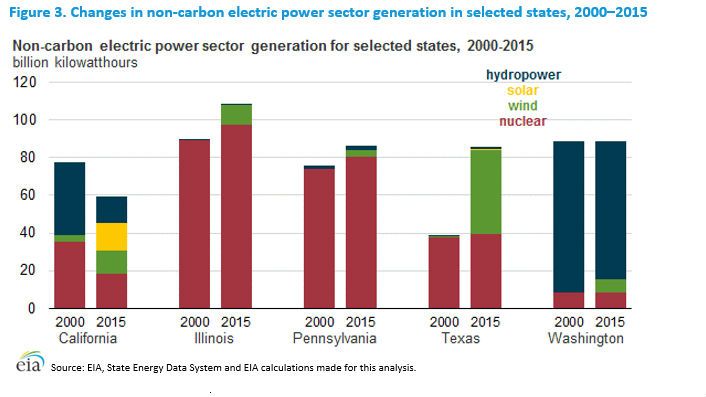 Texas’ green energy projects, often funded by national REPs, are driving competitive prices – and pollution rates – down. That’s why Texas’ current carbon emissions are down to 1998 levels, despite seeing a 33% population increase and 28% electricity consumption increase since the early 2000s. Assuming renewable projects continue their trajectory, deregulated plans and pricing utilizing green energy will become the most affordable option for Texas ratepayers.

What can we learn from Texas?

Professor Steven Puller of the Department of Economics at Texas A&M explains, “states with deregulated power allow the market to generate creative green energy options for households”. Even with green pricing premiums ranging from $0.001/kWh to $0.05/kWh, the National Renewable Energy Laboratory reports that more and more customers are opting into “volunteer green power” markets each year.

Deregulated retail markets not only drive competition, they drive innovation – Texas’ system offers customers affordable prices while ensuring a future for environmentally-conscious energy technologies. The Texas deregulated energy market should be an example to electricity markets in the rest of the country.