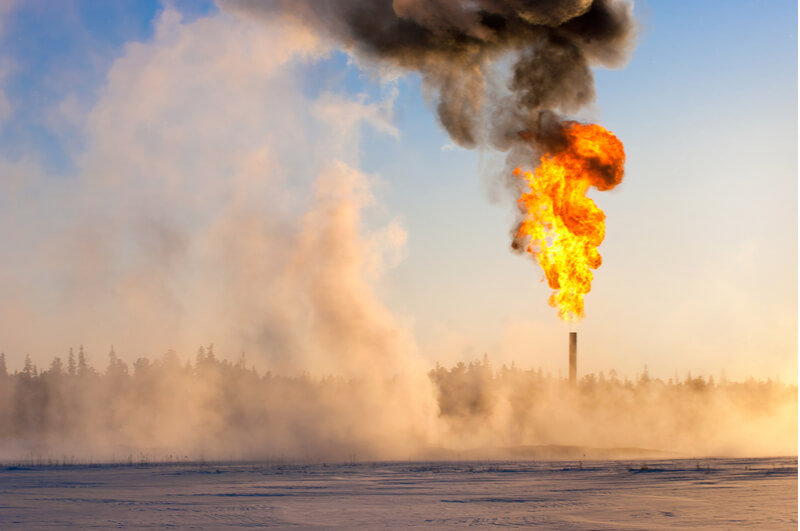 Oil companies in the Permian Basin could produce revenues of more than $400 million by capturing natural gas. According to a new report, producers could see these revenues by 2025.

If Texas required companies to capture 98 percent of the natural gas they produce, the need for flaring would almost disappear. This is a finding from researchers from energy consultancy firm Rystad.

Flaring occurs when excess gas is burned off at the wellhead during the production of crude oil. Greenhouse gases, including methane, are released into the air as a result. According to the Environmental Defense Fund, methane accelerates climate change. This is because it is 84 times more capable of capturing heat than carbon dioxide over the short term.

Opponents of flaring guidelines say that oil companies would suffer from unnecessary regulations. But the EDF argues that restricting flaring could actually benefit the oil majors and the environment. “We’re talking about stopping the release of something with value,” explains Colin Leyden, the EDF’s director of regulatory and legislative affairs. “There’s significant value creation to be had with a 98 percent gas capture metric.”

The Rystad report pegged that value at $440 million by 2025 if a law to capture 98 percent of the produced gas is introduced. The study projected oil companies would only need to spend $50 million more to bring their operations into compliance with this measure.

Lawmakers in New Mexico and North Dakota have already introduced gas capture targets for energy firms operating in their states.

In 2014, flaring in North Dakota stood at a nationwide high of 30 percent of gas production. The state’s Department of Mineral Resources worked with the industry to establish a gas capture target of 91 percent for November 2020. As of September 2020, oil and gas producers in the Bakken Shale met the target with a gas capture rate of 93 percent.

Ron Ness, president of the North Dakota Petroleum Council, described the achievement as a “significant milestone resulting from hard work and investments.” According to Ness, energy companies in the state invested $20 billion in gas capturing. The investment also went towards processing infrastructure to reach this goal.

New Mexico which shares the Permian Basin with Texas. This state proposed a 98 percent gas capture target in July 2020. The proposal is part of the state’s effort to curb its methane emissions and other volatile compounds. It would require oil and gas producers to reach the target by 2026. But the EDF criticized the proposal, saying it provides too many loopholes for gas producers to avoid the objectives.

Industry groups in Texas argue that energy firms are already making major investments to tackle the issue of flaring. They say this demonstrates that state rules are unnecessary.

The Texas Oil and Gas Association has established a methane flaring commission with 40 oil and gas firms. One of its priorities is to use new technology, such as drones and robots, to monitor gas leaks more.

The TXOGA also claims that producing more natural gas has lowered emissions by forcing coal power plants offline. The group fears that increases in the cost of natural gas production could slow that trend. “The fact that 99.5 percent of gas is being captured speaks volumes to the commitment of this industry,” comments TXOGA President Todd Staples. “Any new tax will hurt this product that is responsible for the cleanest air in the nation.”

Yet environmentalists aren’t the only ones putting more pressure on oil companies to do a better job of capturing natural gas. Last September, several major financial investors addressed a letter to the Texas Railroad Commission, which is responsible for regulating the oil and gas sector. This letter called for the elimination of flaring by 2025.

In the letter, AllianceBernstein, California State Teachers Retirement System, and Legal General Investment Management wrote, “Actions of leading operators demonstrate the financial and technical viability of ending routine flaring. It is clear, however, that voluntary actions alone have been insufficient to eliminate routine flaring industry-wide.” The three funds manage a combined $2 trillion in investments.

In November, the Railroad Commission introduced a new procedure for oil companies to request flaring permits. Applications for flaring will now need to include an explanation of why the company needs to flare. But critics say that this will do little to reduce the burning off of natural gas at the wellhead.