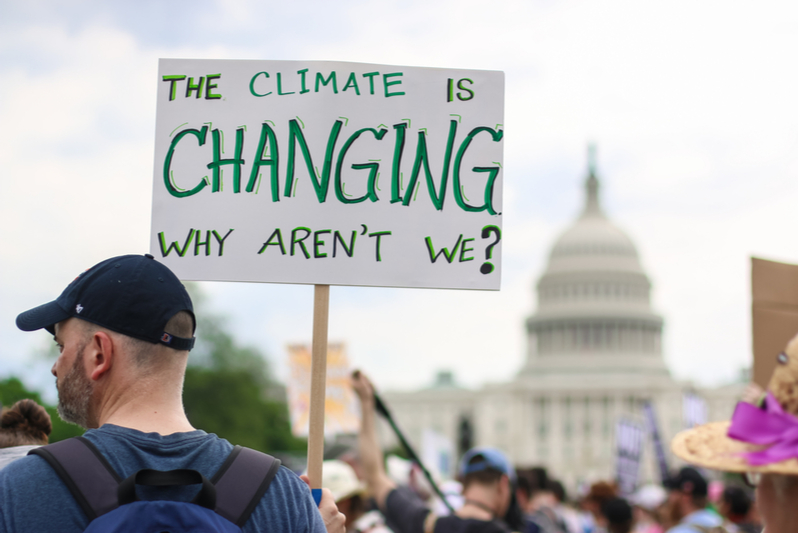 A majority of Americans believe the government isn’t doing enough to stop climate change, according to a recent study from the Pew Research Center. In a presidential election year, that statistic could make a difference.

“When it comes to what activists are looking for, the most important thing is moving beyond symbolism to on-the-line commitments that can be cashed in after Inauguration Day,” said environmental author Bill McKibben in a Politico article.

In a fight historically divided along party lines, the numbers don’t lie. Climate matters in 2020. The real question: how much?

Breaking the historical silence on climate

Candidates from both parties traditionally toed a careful line where environmental activism is concerned. “In 2012, it took Hurricane Sandy, in the final days of the campaign, to shake a few pro forma words out of Obama and Romney,” explained McKibben.

But climate activists refuse to be ignored this year. Riding the momentum of the movement that brought a “Green New Deal” sit-in to Speaker Nancy Pelosi’s office in 2018, youth climate movement organizers have a string of events planned in the lead-up to November.

As climate change starts to impact other areas of political life, including immigration and refugee crises, it is becoming impossible for any legitimate candidate to avoid.

“Increasingly, climate change is the classic intersectional issue, one where many types of injustice converge, the fight led by people who live on the front lines of devastation,” wrote McKibben. “Connecting climate with health, with jobs, with justice hasn’t watered down the issue: It’s made it a priority for many more Americans who can see how the crisis touches their everyday lives.”

Then again, 2020 was supposed to be a “climate election” year in Ireland, too. Heading into the country’s general election in February, 55 percent of voters said climate change was the most important issue for them. Two weeks before the vote, that number had dropped to 7 percent.

Only time will tell if the American movement has enough staying power to matter come judgment day.

With 90 percent of Democrat voters supporting more federal global warming aid, there is no hedging and no hiding on the liberal side of the 2020 tracks. A few Democratic candidates are taking notice and making it abundantly clear where they stand.

That 90 percent also thinks the country should prioritize renewables over fossil fuels. Still, as the party tries to win over traditionally red states and districts, some Democrats are shooting for a middle-of-the-road stance on environmental activism.

In the Texas Senate race, a handful of Democrats are challenging incumbent Sen. John Cornyn (R) for the U.S. seat. In interviews with the Texas Tribune, four out of five of them said they would not sign Rep. Ocasio-Cortez’s Green New Deal if given the chance, citing the legislation as too polarizing.

A smaller majority (3/5) would not support a federal ban on fracking, instead preferring more regulations, more environmental protections, and more research. Most (4/5) support cap-and-trade plans to reduce emissions.

The bottom line: even Democrats are hesitant to take a hard green line in a red state whose electricity generation is over 68 percent fossil fuels.

The presidential race is no stranger to climate duality, either. Washington governor Jay Inslee came into the race on a green platform including comprehensive legislative proposals. His campaign ended in August when he failed to break one percent in polls.

“In other words, climate change may occupy a position in the party much like Elizabeth Warren does in the primary: Both are just about every Democrat’s second-best friend,” reported Robinson Meyer in The Atlantic.

With attention focused on the jumble of Democratic contenders, the Republican Party has so far flown under the radar in 2020. According to the Pew study, only 39 percent of Republicans say the federal government isn’t doing enough to curb climate change.

But that’s not the end of the story for the GOP this year. That 39 percent is heavily fractured among age and ideology lines. Though conservative Republicans are for the most part unmoved, moderate and liberal Republicans are increasingly concerned about global warming. 31 percent of Boomer and older Republican voters (before 1961) want more federal intervention, compared to 41 percent Generation X (1961-1981) and 52 percent millennial and younger (1981 to present).

“In conversations with 10 GOP analysts, consultants and activists, all said they were acutely aware of the rising influence of young voters…who in their lifetimes haven’t seen a single month of colder-than-average temperatures globally, and who call climate change a top priority,” reported Lisa Friedman in the New York Times.

In response to this trend, the Republican Party is building momentum in ways that won’t threaten the coal and fossil fuel lobby, with, for example, a trillion trees. The idea is that those trees could help counteract the negative effects of human carbon emissions – when they reach maturity in 100 years.

The young and the restless

Overall, it’s unclear how big of a part climate will play this year, with shaky efforts on both ends of the political spectrum. While Democratic and Republican candidates recognize the country’s growing frustration, neither side seems sure of how far to take their efforts.

What is clear is that the age of American voters is paramount to any green election outcome this year and in years to come. Adding to the majority of Democrats who already support further climate measures are the 78 percent of millennial and younger Republicans, now of voting age, who think the U.S. should prioritize renewable energy over fossil fuels.

For reference, millennials are expected to be the largest age group in the 2020 election, while Generation Z is casting its vote for the first time.

“In surveys and academic research, members of Generation Z, who could account for one in 10 voters [in 2020], consistently rank climate change as one of their top two priorities, rivaled only by gun violence,” wrote New York Times reporter Maggie Astor.

When it comes to saving lives and saving the planet, it appears young Americans would rather place their bets on having a future than rely on the habits of the past.