2018 was a banner year for clean energy jobs in the U.S., according to a recent analysis by nonpartisan group E2 (Environmental Entrepreneurs). Jobs in the clean energy sector – which includes renewables, grid modernization, energy efficiency, and clean vehicles and storage – have been on the rise since 2016 and now outnumber fossil fuel jobs three to one.

Some other important numbers:

Energy efficiency jobs, including ENERGY STAR® and HVAC (heating, ventilation and air conditioning) workers, advanced building material workers and efficient lighting experts, account for more than 2.3 million of clean energy jobs in the U.S. The renewable energy industries employ another 508,484 workers, nearly 335,000 of which are in the solar industry.

After nearly a decade of growth, the solar industry saw a 4.2 percent decline in jobs in 2018, in part due to rising tariffs on steel and solar panels. However, experts predict that the solar industry will bounce back in 2019 with projected job growth of 8 percent.

Spurred by growing popularity and demand, the clean vehicle industry saw a 16 percent increase in jobs from 2017, bringing the industry total to roughly 254,000. Increased research and funding has placed similar emphasis on the clean energy storage industry; the number of jobs in clean storage rose 14 percent in 2018.

California (512,934) and Texas (233,447) take the top spots for total clean energy jobs, which is not a surprise given the states’ dedication to solar and wind industries. Florida, New York and Michigan round out the top five states for clean energy jobs.

Again, the E2 report expands on the topic below: 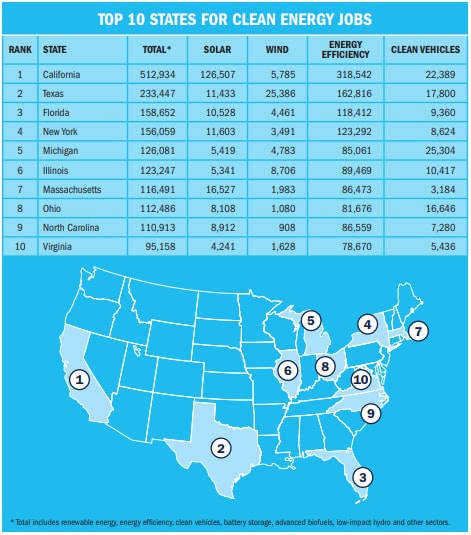 While the states above account for roughly 1.2 million of the country’s clean energy jobs, many other states are looking to grow their clean energy workforce. The following states had the highest rate of growth in the clean energy sector:

Gabriella is a North Carolina-based writer covering topics related to the energy industry and the environment. A Sunshine State native, Gabriella graduated from the University of Florida in 2017 with a bachelor’s degree in English.