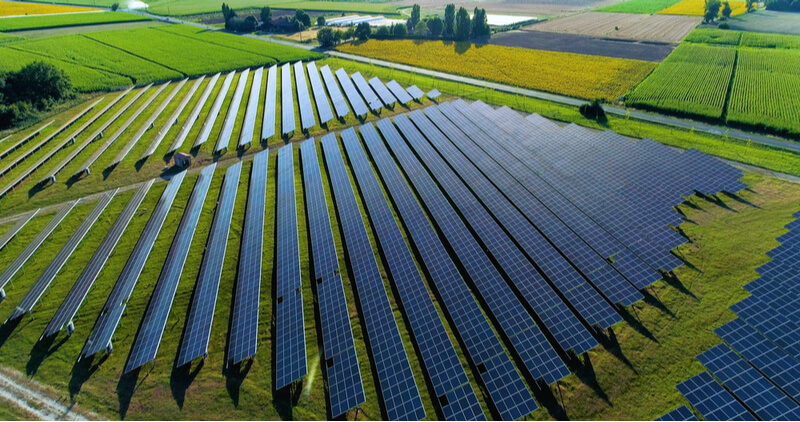 “We have our fair share of tornadoes that come through, and hail storms. And if those panels get broken that stuff leaches out and goes right into the ground water and into the soil.”

As Texas solar power is ramping up, residents are raising concerns such as this in their fight against new solar farm developments, according to the Killeen Daily Herald. The main questions include:

The answers aren’t as simple as one might think. Here’s what we found.

Apex, the solar company involved in the Herald article, maintains its solar panels are made of silica, tempered glass, and wire – no harmful materials included.

Silica (or silicon) is a naturally occurring compound, often found in sand. It is the part of a solar panel that absorbs sunlight. Silica is extremely abundant and has electric potential, making it ideal for solar panel use.

According to the Climate Reality Project, solar panels are made up of silica-based solar cells. The silica absorbs sunlight, knocking electrons out of alignment. Free electrons collect and flow through a conductor to create electric current.

So, fundamentally, solar panels are not built with toxic materials. But there’s more to the story than that. First, manufacturing solar panels does create carbon dioxide, albeit far less than coal or natural gas processing.

The bigger problem, though, is what to do with the panels at the end of their lifespan. A typical solar panel warranty lasts about 20 to 25 years.

In 2016, there were 250,000 metric tons of solar panel waste in the world, expected to increase to 78 million by 2050. Sometimes, this waste contains materials such as lead and cadmium – toxic materials that could get into the soil if the panel cells broke.

“There is real-world precedent for this concern. A tornado in 2015 broke 200,000 solar modules at southern California solar farm Desert Sunlight,” reported Michael Shellenberger in Forbes.

In the end, about 70 percent of those broken modules were recycled into new panels, but 30 percent had to be swept up and treated as hazardous waste.

However, a 2018 Guardian article debunked Shellenberger’s claims, explaining that leaks are only a concern with broken panels, which are rare outside of natural disaster areas.

“In a disaster area, leaching of metals from some broken solar panels is the least of a city’s problems,” the Guardian wrote.

The paper reported that, on average, 80 percent of a solar panel is recyclable. Though the recycling system needs work to make it a usable reality, panels can be stored until the right technologies are available.

The bottom line: Solar panels aren’t perfect. They create waste, but it’s waste that can be contained until there are systems in place to deal with it, unlike the waste leaking into the atmosphere from the current energy supply.

Do solar farms cause erosion?

Erosion, while a natural process, is quickened through farming and other human development. A lack of developed indigenous root systems makes it easier for rain and wind to carry soil away.

Building a solar farm falls into the “other development” category. While the basis of a solar farm is environmental-friendliness, that benefit comes only after the panels have been installed. In the interim, farm construction includes drilling, plowing, concrete or metal panel anchors, and underground power lines.

Additionally, solar farms are often placed on a slope. Many areas of the farm are shaded by the panels, making it difficult for sun-dependent vegetation to grow, while the slope allows runoff to quickly chart a path to local waterways.

If solar farm developers fail to account for this beforehand, projects can have a detrimental effect on the surrounding communities.

“All of these factors readily influence the volume and flow rate of runoff that, if not properly managed, can result in negative impacts to downstream and neighbouring properties,” explained solar project engineers in an Environmental Science and Engineering magazine article.

The ESE article recommends developers implement erosion controls well before panels are installed so the ground can be properly prepared while still easily accessible.

Back at the Texas solar farm, Apex is placing its bets on planting native grasses alongside their panels to prevent runoff and erosion. By plowing only bi-annually, the company hopes the seeds will return the area to its original state, just with added solar power.

The bottom line: Yes, solar farms can cause erosion if not properly managed, just like any other development project. With a few thought-out controls, the worst effects can be avoided.

Who would pay for clean up if a solar farm was damaged?

Solar panels are more durable than they might look. Though made of glass, they are constructed to withstand harsh weather elements and frequently live up to the challenge.

“When affixed to a home, solar panels are capable of withstanding windspeeds of over 140-160 miles per hour, similar to the strength of category 4 and 5 storms,” reported UN-accredited non-profit Ideas For Us. “Some panels are built to withstand even stronger wind strengths.”

It’s not impossible for panels to break, though, and in that case, who is responsible for fixing it?

Examples are scarce, but it appears it is the responsibility of the farm owner to clean up the mess. When Hurricane Maria took out a good portion of the Humacao solar facility in Puerto Rico, the managing utility company hired a solar developer to fix it. In the case of rooftop solar, the system warranty (usually 20-25 years) should cover the repair.

As for any toxic leaks as a result of broken panels, the chain of command is unclear. The need for it, however, is also unlikely. The bottom line: Solar panels are strong enough to withstand the elements and rarely face damage.