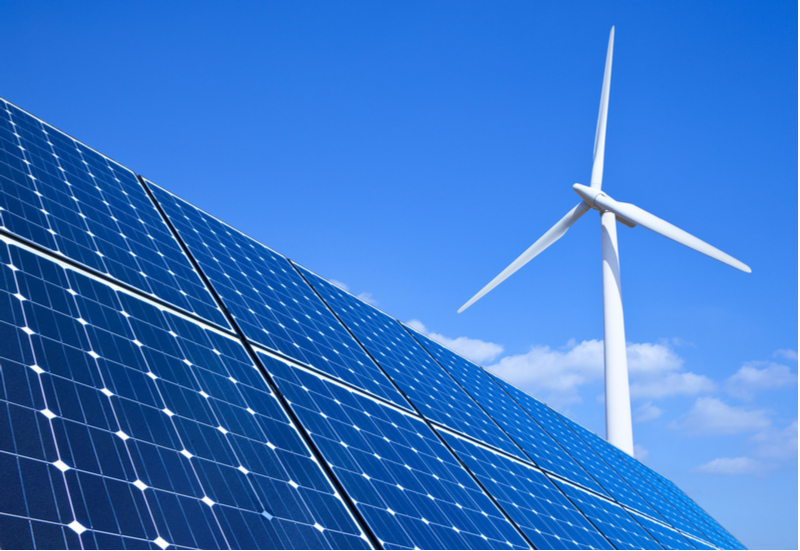 In a historical first, coal has taken a backseat to renewable energy in the United States. According to a Federal Energy Regulatory Commission report earlier this month, the U.S. generated more energy from renewable power resources in the first four months of 2019 than from coal.

FERC’s monthly Energy Infrastructure Update (EIU) highlights the construction and expansion of new energy generation units based on fuel type in a chart called “New Build and Expansion.” EIU data (through April 2019) indicates 18 units of new wind capacity (1,545 MW), 102 units of new solar capacity (1,473 MW) and four units of new hydropower (29 MW) were added between January and April. Combined, that pushed renewable energy’s share of U.S. generating capacity up to 21.56 percent. Meanwhile, coal accounted for only 21.55 percent of capacity, down from 23.04 percent from 2018.

Though the variance in capacity between coal and renewable energy is negligible, FERC data shows U.S. renewables are adding one percentage point of capacity, on average, each year. The EIU also forecasts this trend will continue, with the capacity gap between renewable and coal widening in favor of renewable energy in the coming months.

This development follows the April release of a statistical report by the International Renewable Energy Agency outlining worldwide data of renewable power generation capacity. According to the IRENA report, renewable energy now accounts for one-third of all global power capacity, placing the U.S. in line with emerging international energy trends.

The increased capacity is a short-term success for renewable energy suppliers, but that capacity doesn’t currently equivocate to power generation. Because of the irregular output of renewable energy sources, coal remains a preferred power generation supplier for electricity. But Forbes reports that trend is evidence that it’s just a matter of time before renewables overtake coal in capacity and generation, making renewables a preferred favorite for the long term, too. Both the April EIU and the U.S. Energy Information Administration sustain this assumption.

In its short-term energy outlook, the EIA forecasts that U.S. coal consumption will fall to 602 short metric tons (MMst) in 2019 and then to 567 MMst in 2020. The forecast reflects an ongoing decline in the demand for coal to generate electricity and worsens the coal sector’s 39-year low (687 MMst) from 2018.

By 2022, FERC projects with “high probability” the generation of additional renewable capacity could result in a net increase of 40,993 MW. Meanwhile, the generating capacity for nuclear, coal, oil, and natural gas is expected to decline by 24 MW due to unit retirements exceeding the emplacement of additional power generation units.

“My data set is consistent with what FERC published,” said Bryan Jacob, solar program director for the Southern Alliance for Clean Energy. Jacob primarily tracks solar outlooks throughout the southeast U.S. and publishes an annual report outlining progress and trends toward increasing renewable capacity. “All signs point to yes; renewables are growing.”

This reduction in generating capacity for nuclear, coal, oil, and natural gas means that there will be a power generation delta to fill, which will likely broaden the prevalence of renewables across the U.S. for energy generation in the coming years. The EIA forecasts renewables will collectively generate 18 percent of U.S. electricity in 2019 and almost 20 percent by 2020.

The shift in renewable energy capacity hasn’t been a cause for alarm in the other energy sectors, yet. Natural gas still accounts for nearly 44 percent of energy capacity and generation and is expected to stay steady at that rate for some time. However, the April EIU indicates rapid growth in wind and solar continues to outpace other energy sources—including natural gas.

If FERC’s predictions prove correct, over the next three years renewable energy will deliver almost one-quarter (24.15 percent) of the nation’s energy capacity while continuing to pick up more power generation capabilities as other sectors decline.

Private sector investment trends are also warming to the prospect of an increasingly renewable-based energy sector.

Last month, the American Council on Renewable Energy surveyed investment professionals from the major institutions that finance and invest in the U.S. renewables. The respondents to ACORE reported a high level of confidence in the renewable sector’s growth through 2022, with most respondents indicating that, compared with other leading countries, the U.S. will continue to be an attractive venue for renewable energy investment. More than one-third of the respondents bolstered this claim by acknowledging their intent to increase institutional investments in U.S. renewables by more than 10 percent in 2019.

Given the combined trends across finance and energy, all signs point to renewables emerging as the dominant energy provider in the coming years.

Anthony Clemons covers major trends throughout the energy sector. A graduate of Teachers College, Columbia University, he has worked in higher education and as an education consultant for the defense sector since 2010. He is taking an M.F.A in Nonfiction Writing at Goucher College.