What does energy deregulation mean for me?

In regulated energy systems, your area’s utility company sells you energy and delivers it to your home. It has a monopoly because there’s only one utility company per ZIP code. In deregulated systems, the energy market has been opened to competition. This means that independent energy suppliers can now sell you energy, too. They often offer more plan options at different prices than the utility company, which leaves you with a lot more choice for your energy supply.

Which states have electricity deregulation?

Sixteen states and the District of Columbia currently have some level of electricity deregulation – but that doesn’t necessarily mean residents in all those states can choose their energy provider. As is typical of energy deregulation, it’s complicated, with some states offering more options than others.

Most states that are deregulated made the legislative move at the turn of the century, somewhere between 1996 and 2002. Here’s the deregulation timeline for states across the country: 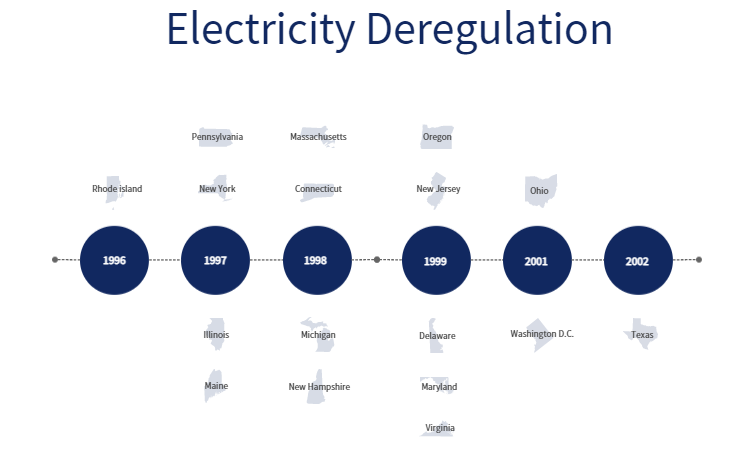 Rhode Island: Rhode Island is deregulated for residential consumers, though customers also have the option to stay with their utility company under default offer service.

Illinois: Illinois is deregulated for residential and commercial customers. Energy choice began with residential service and extended to commercial in 2002.

Maine: Maine deregulated its market in 1997 after a long process and many killed proposals.

New York: Energy deregulation in New York is more widely used than in many other states, with retail electric providers being called Energy Service Companies (ESCOs).

Pennsylvania: The Electricity Generation Customer Choice and Competition Act opened up the market in Pennsylvania, leading it to become the largest energy choice program in the country at the time.

Connecticut: In Connecticut, consumers can choose to purchase electricity from an independent supplier or the state’s two utility companies.

Massachusetts: Electric customers have had energy choice since 1998, giving them an alternative to utility companies National Grid, Eversource, and Unitil.

Michigan: The restructuring of Michigan’s energy market gave both residents and businesses the option to choose their electricity provider.

Delaware: In Delaware, customers in the Delmarva Power and Delaware Electric Cooperative service areas can choose a third-party electric supplier, if they wish to.

Maryland: The Electric Customer Choice and Competition Act established energy deregulation in Maryland, with price freezes in effect until the market readjusted.

New Jersey: Residential customers in New Jersey have the power to choose, though only about 20 percent have currently done so.

Oregon: Oregon currently has very limited electric choice – available only to business customers. Residential customers have some choice within the offerings of their utility company.

Virginia: Virginia deregulated the electricity market in 1999 but rolled back the changes in 2007. Energy choice is currently only available for commercial customers or customers who don’t have a 100 percent renewable option with their local utility company.

Ohio: In 1999, Senate Bill 3 – also known as the Ohio Electric Restructuring Act – called for deregulation by 2001.

Washington, D.C.: Electricity was deregulated in D.C. with the option for customers to stay with their utility company under standard offer service, if they do not wish to choose an alternate provider.

Texas: One of the most popular states for electricity deregulation, about 85 percent of Texas consumers – residential and business – can choose a retail electric provider. In fact, it’s the only state where deregulated customers must choose an alternate provider and cannot purchase energy from their utility company.

A note on natural gas deregulation

In addition to electricity deregulation, some states have also deregulated part or all of the natural gas market. We’ve chosen to focus on electricity for this guide, but the following states all have some level of natural gas choice. Keep in mind that many limit this choice to industrial and commercial customers.

As with any specialized industry, there is some specific vocabulary you’ll encounter when you live in a deregulated electricity state. This includes terms to describe the companies you’ll buy energy from, the documents that explain how a plan works, and more.

Let’s start with the companies you have the choice to buy energy from. Often called energy providers or suppliers, these are the companies that entered the market when it became deregulated. Examples include TXU Energy, Direct Energy, and Constellation. When shopping for an energy plan, you may see energy providers listed under any of these names, which all mean the same thing:

In deregulated systems, energy providers sell electricity plans to consumers – that’s you. The delivery of this energy, however, is the responsibility of your area utility company. What’s the difference between a utility company and an energy supplier? That’s one of the most common questions about deregulation, and thankfully the answer is pretty simple.

If a utility company can also sell energy plans, why have both utilities and providers? The answer lies in competition. In regulated systems, utility companies have a monopoly on their areas and can raise electric prices as they see fit. In deregulated areas, providers compete amongst themselves and with utility companies to offer the best prices, options, and plans for the consumers.

Utility regulators are government bodies tasked with setting delivery charges utility companies are allowed to charge you (you’ll see this as UDC, TDU, or TDSP charges on your bill), managing complaints against utility companies and providers, and overseeing the energy system.

Moving on from the companies you’ll encounter, let’s talk more about energy plans and their documentation. As with all the other terms in this list, your state will determine what exactly these documents are called of the below choices (confusing – we know). But rest assured that all the names mean the same thing. There are two main documents to keep an eye out for when shopping as they’ll help explain what you’re signing up for:

The Electricity Facts Label (EFL) is also called the Terms of Service or a Disclosure Label. This document tells you your rate, what energy sources the plan uses, and all the other details of the plan you’re considering. Make sure to take a good look at this document before you sign up, so you understand what you’re getting.

The Your Rights as a Consumer (YRAC) Disclosure or the Consumer Bill of Rights is exactly what it sounds like. You have specific rights and responsibilities set by your state’s utility regulator. This document tells you what they are so you know if your rights have been violated. Among these rights are fair and non-discriminatory service, privacy protection, and clear contract terms, as well as slamming and cramming. 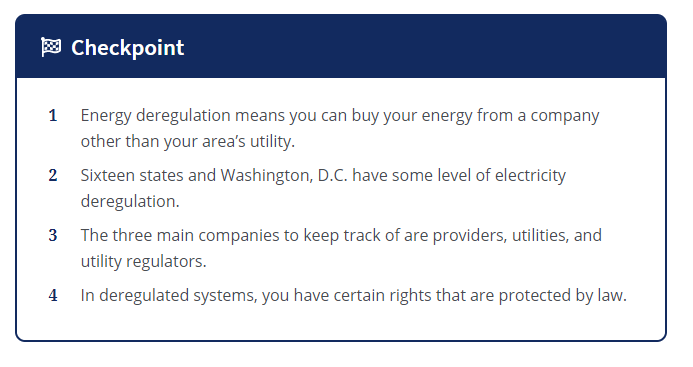 Is energy deregulation a good thing?

The main argument for energy deregulation is that it opens the electricity market up to competition, which is usually a good thing for the consumer. In regulated systems, utility company monopolies leave residents with little say in their energy bills and plans. A few ways in which deregulation has benefited consumers includes:

All of that said, deregulation doesn’t automatically mean you’ll pay less for energy. According to the EIA, areas with energy choice can see higher prices from energy providers than the utility default price, which defeats the purpose of choosing an alternate supplier. The only place where this is not true is Texas, which is the only state where energy choice is not optional. 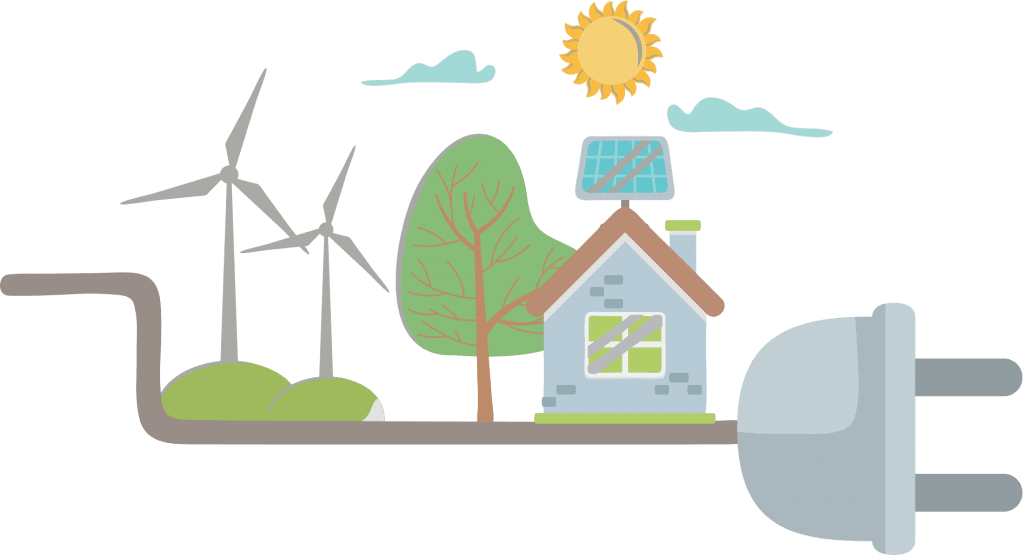 This means that Texas’ consumer choice program is the most utilized out of all the deregulated states. It also means that we can really see the effect of deregulation when people buy into it. According to the latest EIA statistics:

Depending on where you live and how many people buy into the idea of deregulated energy, it can have a big effect on electricity prices throughout the state and across all sectors.

How can I benefit from electricity deregulation?

So what’s the bottom line? Can you make the most of energy choice in your area? That’s where platforms like Choose Energy come in.

Deregulation makes electricity more complicated precisely because of all the choices it introduces. Deregulated customers can now choose from fixed and variable rate plans, solar and wind power, bill credits, usage tiers and so much more. With endless providers and plans to decide between, it can be hard to see which will benefit you the most.

Many online energy marketplaces have popped up to help consumers navigate these choices, but they aren’t all created equal. What makes the biggest difference in choosing the right plan is having the right information in front of you and answering the questions:

That’s where Choose Energy comes in. We show you pricing and bill estimates to help answer those questions. We help do the math so you can make a decision and feel confident that it’s the right one. Enter your address above to map your path to energy choice.

“Deregulated energy is better for consumers – but only when they understand their options. Before shopping make sure you know the rules of you state and how to make the most of your power to choose.”