From cities to suburbs, green roofs are growing across America. More than just a modern design feature, green roofs offer a wealth of benefits to the environment – and to an owner’s wallet.

Green roofs may sound like a trendy new concept, but evidence of the building practice can be traced back thousands of years (the Hanging Gardens of Babylon, for example, were actually a system of green roofs thought to be built around 600 B.C.)

Although green roofs are becoming especially popular in dense, urban environments for their sustainability features and public appeal, they have been a prevalent home feature across Europe for centuries.

So, what is a green roof?

A green roof, or living roof, generally incorporates a system of layers that include waterproofing, drainage, soil and growing vegetation. 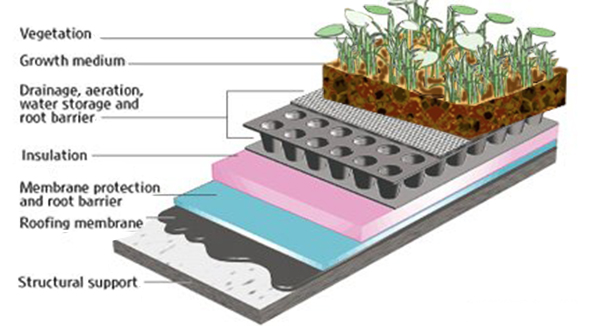 Depending on the structure the green roof is being built on, green roofs can either be intensive or extensive:

An intensive green roof is heavier, more expensive and more complex than its counterpart.  Intensive green roofs feature additional layers of protection and deeper soil to sustain a wider variety of plants; therefore, they usually require professional irrigation and maintenance. Abundant in New York City, Chicago and London, intensive and semi-intensive green roofs are built most often on top of city buildings, where they can act as functional parks and gardens in the sky.

An extensive green roof, on the other hand, is composed of shallow soil and light vegetation, like mosses and sedums, that can survive without deep root systems. Extensive green roofs are the ideal choice for homeowners, since they are cheaper to install and require little-to-no upkeep.

Benefits of a green roof:

Big or small, intensive or extensive, green roofs provide lots of environmental and economic advantages to the buildings – and people – beneath.