The District of Columbia and 29 states have implemented Renewable Portfolio Standards to increase their renewable energy usage and generation. However, thanks to these standards’ varying definitions for “renewable energy,” many states may be playing dirty with renewable energy claims, counting harmful and high-polluting energy sources as renewables.

A new report from advocacy group Food & Water Watch highlights this problem, grading each state with a renewable portfolio standard from a B- to an F, based on the following factors:

According to the U.S. Energy Information Administration, an energy source is renewable if it is “naturally replenishing” or “inexhaustible.” This definition includes well-known renewable sources, such as wind energy, solar power, hydropower and geothermal energy. But, it also considers biomass a renewable energy source – a distinction with which many scientists (including the experts at Food & Water Watch) disagree.

Biomass, which includes energy generated from incinerated landfill waste, technically is considered renewable because civilization will never stop producing trash. However, the burning of waste, sewage and municipal garbage releases harmful greenhouse gases and pollutants into the atmosphere. Biomass also qualifies wood burning as a renewable energy source, even though wood is a finite resource and deforestation contributes to the degradation of society’s breathable air.

“Using that lens,” Horowitz says, “we see that burning biomass (especially wood) is NOT a green alternative even though it’s renewable – it scores worse than fossil fuels on pollution and carbon. … (C)onversion of animal waste and food scraps into heat and electricity is pretty green as long as both the heat and the methane are captured, but loses its luster if the excess is released into the environment.”

Of D.C. and the 29 states with mandatory renewable standards programs, 25 received a grade of D+ or lower. Hawaii’s mandatory standards received the highest overall grade (B+) thanks to its goal of generating 100 percent of the state’s electricity with renewables by 2045. Hawaii got a C-grade, though, for counting wood burning, waste incineration and waste methane burning as renewable energy sources.

Michigan, Ohio, Pennsylvania, Maryland, Delaware, North Carolina and Massachusetts all received an overall F-grade because their target renewable goals were 25 percent or lower, and because they qualify four or more of the report’s six dirty energy sources as renewables. Among the hard words from the study: “Maryland and North Carolina explicitly allowed burning poultry litter in their (Renewable Portfolio Standards). Poultry litter incinerators can emit more carbon monoxide, particulate matter, nitrogen oxides (NOx) and CO2 per megawatt than new coal plants.” 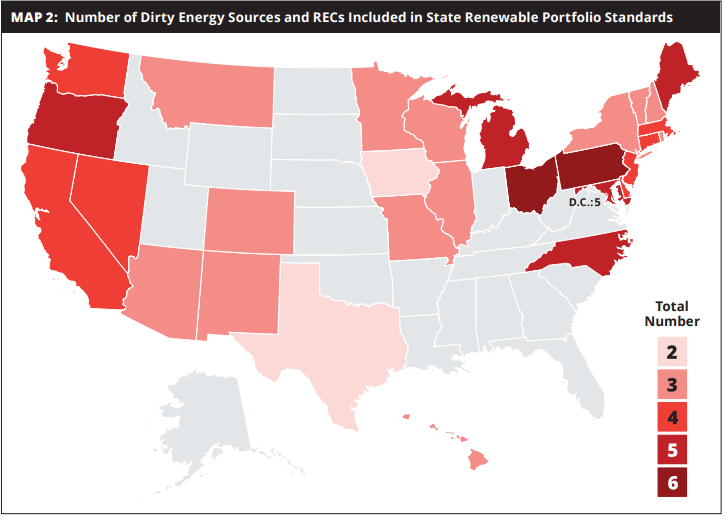 Horowitz notes that the U.S. would do well to emulate Western Europe. “Reducing energy and resource use is the surest way to a true green economy. It’s worth noting that per capita, many countries in Western Europe use about half as much energy as we do here in the U.S., and Europe is continuing to make strides,” he says. “With a major nationwide program, we could easily cut our energy addiction by half, and possibly achieve a 70 or 80 percent reduction. Imagine what that would do not only for our carbon footprint, but our quality of life, as billions of dollars in energy costs get redirected to other parts of the economy.”

Although their approach to renewable energy may be flawed, the 29 states and D.C. included in the Food & Water Watch report should be commended simply for instituting these mandatory standards before the rest of the country. Regardless, the analyzed states should look at the Cleanwashing report as a wake-up call to improve and expand existing green policies. And, as more state legislators enact renewable energy policies, perhaps the threat of climate change in the U.S. and across the globe can be alleviated.