When you think of renewable energy, you probably picture expanses of rural hills or deep ocean covered with vast wind farms and solar panel arrays. You’re not wrong – wind and solar power are inarguably dominating the renewable energy industry.

Texas, for example, has invested over $38 million in wind to power 5.3 million homes; California powers more than 5.2 million homes and 15% of the state’s electricity with solar energy alone. While these figures and goals are huge accomplishments for the renewable energy industry, there is an oft-overlooked green energy source that can help the entire country move towards a renewable future: geothermal energy.

What is geothermal energy?

Geothermal energy takes the Earth’s natural heat and turns it into usable power. The most common method of utilizing geothermal energy is to turn heated water from geothermal reservoirs into steam, which spins a turbine and *voilà* generates electricity. Geothermal reservoirs exist naturally in many areas of the American West and can also be created in areas that have 1 or 2 of the following 3 key geothermal characteristics: heat, water and rock permeability. 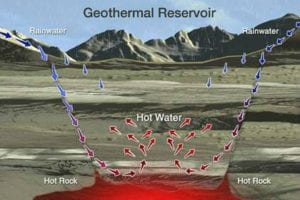 Why is geothermal energy unique?

Geothermal energy can provide a truly never-ending source of electricity, and is therefore the most reliable source of renewable power. Unlike wind farms or solar arrays – which are rendered useless when the wind doesn’t blow or the sun doesn’t shine – geothermal energy will never run out because the Earth’s core won’t, for the foreseeable future anyway, cease being hot.

For those who are skeptical of this “forgotten renewable”, consider geothermal energy’s impact on Iceland: The island, which sits on a platform of shifting tectonic plates and volcanoes, currently generates 25% of the country’s total electricity from geothermal power facilities. And the World Energy Council believes geothermal energy can do much more; scientists behind the Iceland Deep Drilling Project (IDDP) plan to build even more powerful drills that harness heat from deeper within the Earth. If IDDP is successful, estimations show geothermal energy as a viable (and affordable) source of power that could provide over 8% of electricity world-wide.

Geothermal energy in the United States

The main reason that the geothermal energy industry hasn’t exploded across the U.S. is price; it is competing with more established renewable energy sources that have more funding and more public understanding. The American Geosciences Institute is trying to change that; the nonprofit is working with the U.S. Department of Energy to test areas of the U.S. for geothermal energy potential and to develop new extraction technologies. 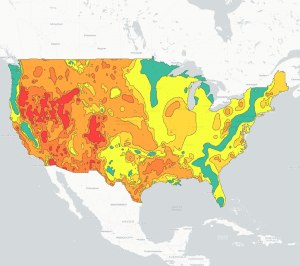 While most investors are waiting for geothermal energy to become more affordable, other energy companies are already staking claims in the burgeoning industry. Controlled Thermal Resources, an Australian energy company, is in the process of acquiring permits to build a billion-dollar geothermal power plant on the Salton Sea in California. According to Jason Czapla, the principal engineer of Controlled Thermal Resources, the site will eventually produce 1,000 megawatts of electricity – enough to power roughly 800,000 homes.

What’s next for geothermal energy?

All in all, it is too soon to predict what effect geothermal energy will have on the United States. But with the world shifting to an all-renewable mindset, it won’t be long before the energy industry makes a serious investment in geothermal energy’s future.