The federal government collected more than $36 billion in fuel taxes in 2016; states pulled in about $10 billion more than that. The revenue is used almost exclusively for road improvements. So, what happens with the rise of electric vehicles?

Major strides in green technologies and the public’s growing interest in all-electric vehicles (like Elon Musk’s Teslas and Toyota’s Priuses) are forcing government leaders to contemplate the precarious future of the gasoline and diesel taxes. Some states are already ahead of the curve.

How Florida is preparing for an electric future

Most people alive today have never known a life before the federal gas tax. Since June 1932, vehicle owners have been paying a small premium every time they fill up at the pump. But with the immense advances in electric vehicle technology and predicted cuts in electric vehicle costs, Florida lawmakers and regulators are preparing for a time when “filling up at the pump” is an outdated expression.

The Florida Department of Environmental Protection is taking $160 million from its portion of the Volkswagen Clean Air Act Civil Settlement to fund projects that explore advancements in zero-emissions technologies. Additionally, Florida’s Public Service Commission has approved a different settlement with Duke Energy Florida that will put $8 million towards the construction of 530 electric vehicle charging stations, 10% of which will be in low-income communities. According to Florida State Senator Jeff Brandes of St. Petersburg, these efforts and others are trying to “encourage cities to think bigger” about the future of transportation.

EV fees are making up for slumping gas tax revenues

Since revenue from the gasoline tax are stagnant or falling nationally, some states have turned to an alternative method of transportation funding: taxing electric vehicles directly, giving rise to an odd contradiction.

Although a number of states offer rebates or other perks to encourage drivers to purchase electric vehicles, 17 states – including Colorado, North Carolina, Virginia, Tennessee and Michigan –  have begun to take some of that money back in the form of an EV fee. The fees, which are enacted to offset a portion of the revenue being lost at the pump, will fund transportation improvements to roads, bridges, highways, public transit and more. And as electric vehicle sales grow, researchers predict more and more states will adopt EV fees.

Are drivers willing to pay the premium? 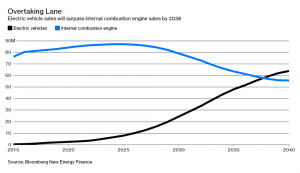 Advocates say the extra fees are often a low price to pay compared to the long-term savings that an electric vehicle offers, both to the driver and to the environment. Therefore, it is safe to say the electric car revolution will race on.